SBAM-O-WIEN WITH SNUFF AND FRIENDS

SNUFF and Friends at The Loft Vienna

Originally formed in N.W. London 1986 as a three piece, Duncan Redmonds on drums and vocals, Simon Wells on guitar and vocals and Andrew Crighton on bass. Sadly Andrew Crighton died in 1999. R.I.P.
Original guitarist Simon can be found these days playing with his band Southport. Early days and gigs were few and far between until the end of 1988, then offers came flooding in. Things really took off when John Peel got the band in for a session after seeing them play with Heresy and Rose Rose at the Sir George Robey in Finsbury park. First a 7’single was released on Workers playtime, followed with a full length album known for short as “Snuff said”, full title “Snuffsaidbutgorblimeyguvstonemeifhedidn’tthrowawobbler chachachachachachachachachachachayou’regoinghomeinacosmicambience” followed with extensive UK and European touring.
Later in 89 and a mini album of covers “Flibbiddydibbidydob” was recorded with Dave Redmonds joining the recording on Trombone and subsequently live where possible. 1990 saw more touring including then East Berlin, Poland and the USA plus the recording of the second full LP “Reach” 1991 More touring including Europe and two trips to Japan before the band folded and called it a day with a gig at the National ballroom, Kilburn in August 15. Summer 1994 and Duncan, Simon and Andy reformed the band, Dave still on trombone and this time adding Lee Murphy on Hammond organ. At first the band intended on a name change and played under various names before Fat Mike persuaded the band to return to the original name Snuff. A year later, after UK, European and Japanese tours plus an appearance Reading rock festival, Simon Wells left and was replaced on guitar by the then roadie Loz Wong. This line up then recorded “Demamussabebonk” for Fat and Deceptive and set off on tour including the UK, Europe and the US. End of 1996 and Andy records with the band for the last time on the “do do do” ep then bails out somewhere over Middlesbrough. Jools from Guns N wankers stands in until a full time replacement is found in Lee Erinmez(then Batsford).
1997 and the line up Of Duncan, Dave, Lee Murphy, Lee Erinmez and Loz records covers album “Potatoes and melons wholesale prices straight from the lockup” and the second album for Fat and Deceptive “Tweet tweet my lovely”. The band make it to Australia for the first time. 1998 sees extensive touring as a four piece of Duncan, Loz, Lee Erinmez and Dave then, 1999 sees the release of “Numbnuts” on Fat, Pizza of death and Deceptive and appearences from Eric from the Pietasters on keyboards. 2000 Paul Thompson, from Midway still, joins as second guitarist and Terry Edwards joins on keyboards, trumpet and sax and the band record the mini album “Blue gravy” released on Fat, Pizza of death and the bands own label 10past12 records.
2001 and the band tour as a 7 piece with Sarah DeCourcy joining on keyboards. 2002 the band record full length lp “Disposable income” which is released in 2003 on 10past12 records and Inyaface in Japan, again the band sets off on tour around the world. 2004 and a mini album of covers “Greasy hair makes money” is released on 10past12 and Inyaface and after a european tour the band take a break. 2008 and an invitation to play a wedding is the catlyst that gets the band up and running again, albeit sporadically, with the 1997 five piece line up of Duncan Redmonds on drums and vocals, Lee Murphy, hammond organ, David Redmonds, trombone, Loz, guitar and Lee Erinmez on bass Between 2008 and 2010 the band plays gigs in Japan, the UK, Germany, The US and Spain and 2011 sees the band working on new songs.
2011 and sadly Dave Redmonds(trombone) has to bale out. A replacement is found in Oliver Stewart. The band then tour Germany in April with Oli on trombone and Gavin Kinch standing in on keys for a very sick Lee Murphy. By early May Lee Murphy is recovered and the band is back in the studio for the first time in years recording a song with a Japanese artist. Mid May the band plays a London benefit gig followed late May/early June by a short French tour with old friends The Burning heads. July and Snuff is back in the studio again recording four new songs and four Japanese covers for a Japanese tour ep. Late August/early september and the band tour Japan finishing with a headline slot at the Shibuya crash festival.

In 2012, Snuff recorded their first full-length album since 2003’s Disposable Income. The album, titled 5-4-3-2-1 Perhaps? contains 12 new tracks and was released on 8 January 2013. In August 2015, Snuff completed a full UK tour supporting Bad Religion. In February 2016, they celebrated ’30 Years of Snuff’ with a full UK tour.
In September 2019 Snuff released a new album, There’s A Lot of It About, on Fat Wreck Chords, recorded in 2018. Lee Erinmez left the band shortly after the recording and was replaced by Dan Goatham. In May 2020 Snuff released a new EP, The Wrath of Thoth. 2021 and Snuff have been in the studio recording a brand new album.

TheStaticAge are an American #postpunk band originally from Burlington, Vermont consisting primarily of Andrew Paley and Adam Meilleur. The band’s name is taken from the Misfits’ long-unreleased first album.

We are playing punk rock 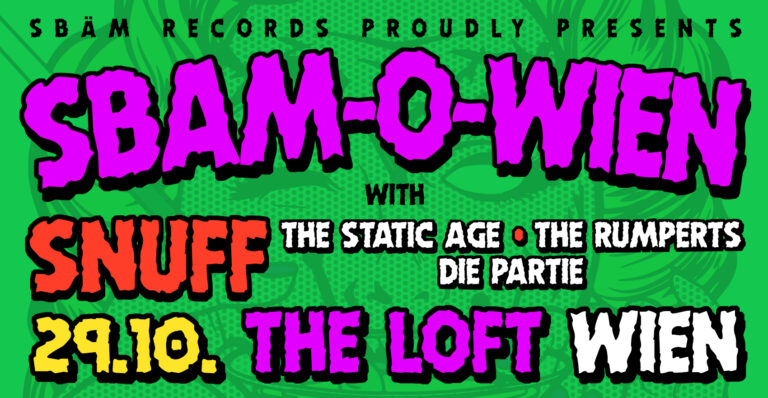 SBAM-O-WIEN WITH SNUFF AND FRIENDS